Braga (Bracara Augusta) was founded by the Romans from the year 27 B.C. It was the capital of the Roman province of Galicia, in the third century. It was conquered by the Swabians, who made it the capital of his kingdom (V century) and later by the Visigoths. At this time, it was an important religious center. Between the eighth century and the tenth century, it was invaded by the Arabs, having been totally destroyed. In the eleventh century, it resurfaces in the shadow of the cathedral and the power of the archbishops, Braga masters.

Braga (Bracara Augusta) was founded by the Romans from the year 27 B.C. It was the capital of the Roman province of Galicia, in the third century. It was conquered by the Swabians, who made it the capital of his kingdom (V century) and later by the Visigoths. At this time, it was an important religious center. Between the eighth century and the tenth century, it was invaded by the Arabs, having been totally destroyed. In the eleventh century, it resurfaces in the shadow of the cathedral and the power of the archbishops, Braga masters.

In 1494 left the Braga John Gherlinc press the first printed Braga breviary. In the sixteenth century humanist, D. Diogo de Sousa, a true prince of the Renaissance, Braga archbishop (1505-1532), undertakes the profound transformation of the medieval old town (with 24 streets and 800 houses), both in urban and in culture. Enrich Cathedral with a majestic apse. Open streets and squares inside and outside the walls  (Campo da Vinha, Carvalheiras, Hortas, Remédios).  He founded the S. Marcos Hospital. Enche Braga de fontes e de esculturas.Fills Braga sources and sculptures. It tears the big mall called Campo de Sant’Anna, today Avenida Central. But it is also at this time that accentuate the eminently religious characteristics of Braga, through the foundation of countless monasteries, convents  (S. Frutuoso, Remédios, S. Paulo, Pópulo, Salvador), colleges, seminaries, brotherhoods, etc. It is this development that strongly affects the mentality and way of life of the inhabitants of Braga.

In the eighteenth century, the city is evident in the style of architecture – baroque – that deeply marks. At this time, it appears that it can be considered the greatest genius of Braga art, André Soares. The it must, among other works, the Casa da Câmara, o Palacete do Raio and Congregados Church.

At this point Braga centered an important part of the trade that dominated the countryside. From the nineteenth century, begins a process of adulteration and destruction of its historical center. To this contributed, on the one hand, the French invasions and liberal fights that hit hard Braga with its immense drying of robberies, lootings and destructions; on the other, attempts to “modernize” the city, which led to the destruction of important monuments and the almost total disfigurement of medieval and sixteenth-century city. This destruction, which extends to the present day, in contrast to the development and increasing importance of Braga, true heart of Minho. 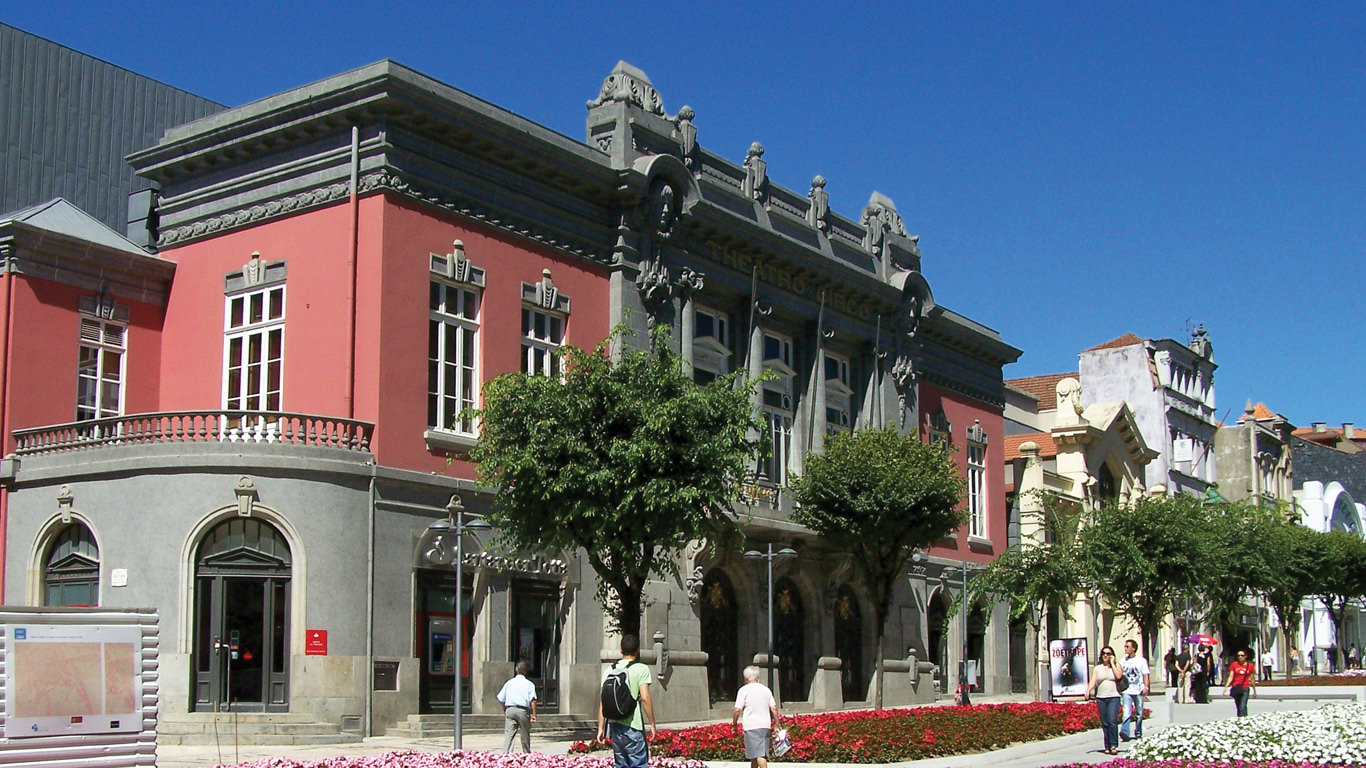 It is a reference in the art world for having one of the most charismatic showrooms of the country and for its programming quality and eclecticism. 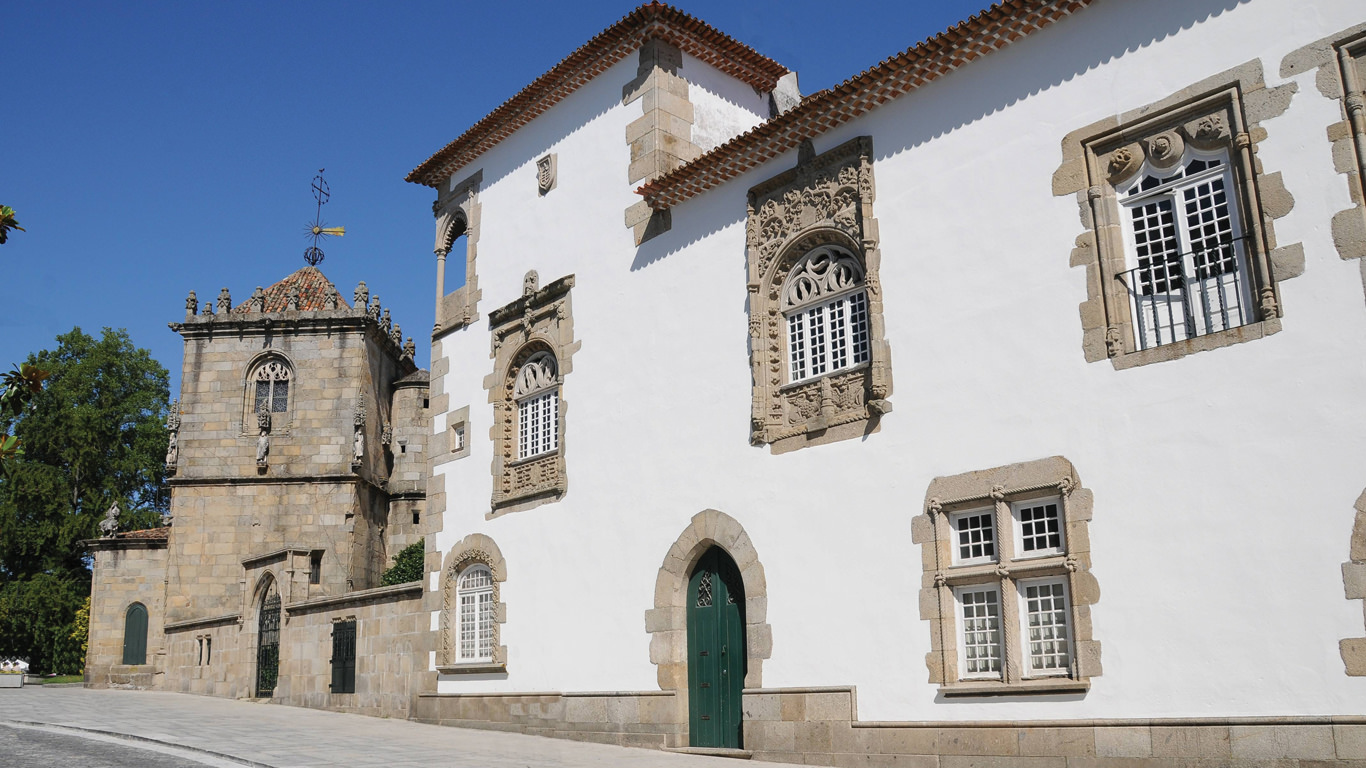 The first church of St. John of Souto, originating in the twelfth century, was located then on the wall, being located within a typical medieval suburb expansion, resulting in this case the confluence of three roads. 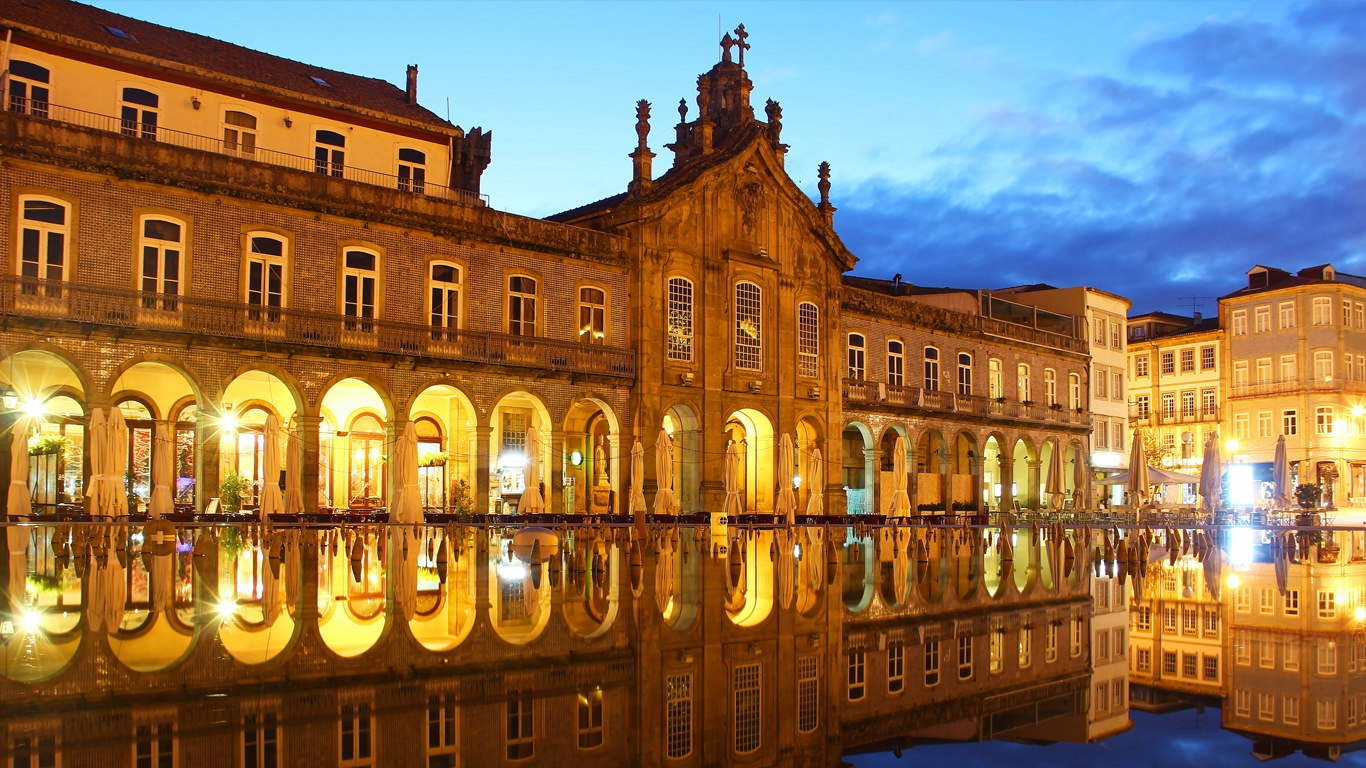 Bragas’ Arcade goes back to the 18th century. The calling card of the city was built against the Medieval wall and,in the 19th century, a second floor was added.Today, is a lively place full of coffee shops, gardens and fountains, where no traffic is allowed. 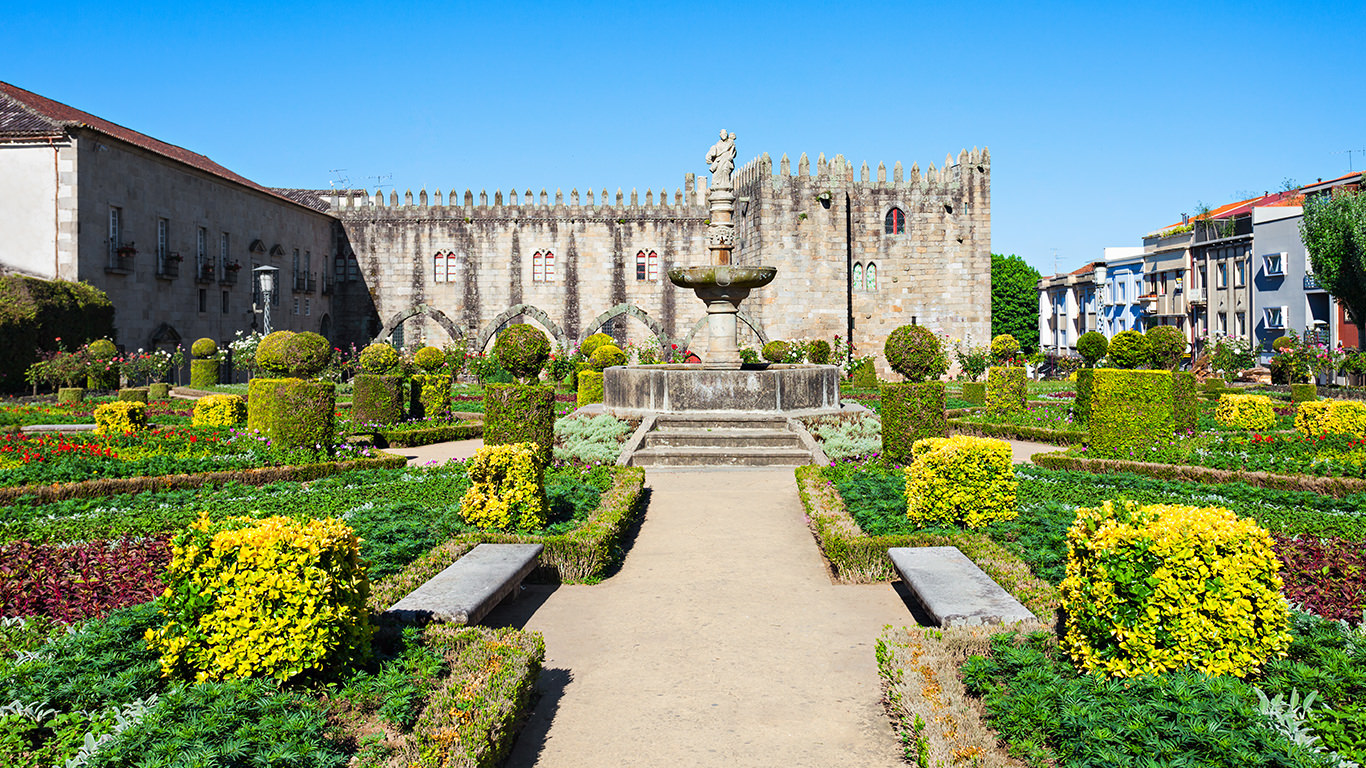 It is a public garden.The name of the garden comes from a statue of Saint Barbara standing on the fountain located in the middle of the garden. 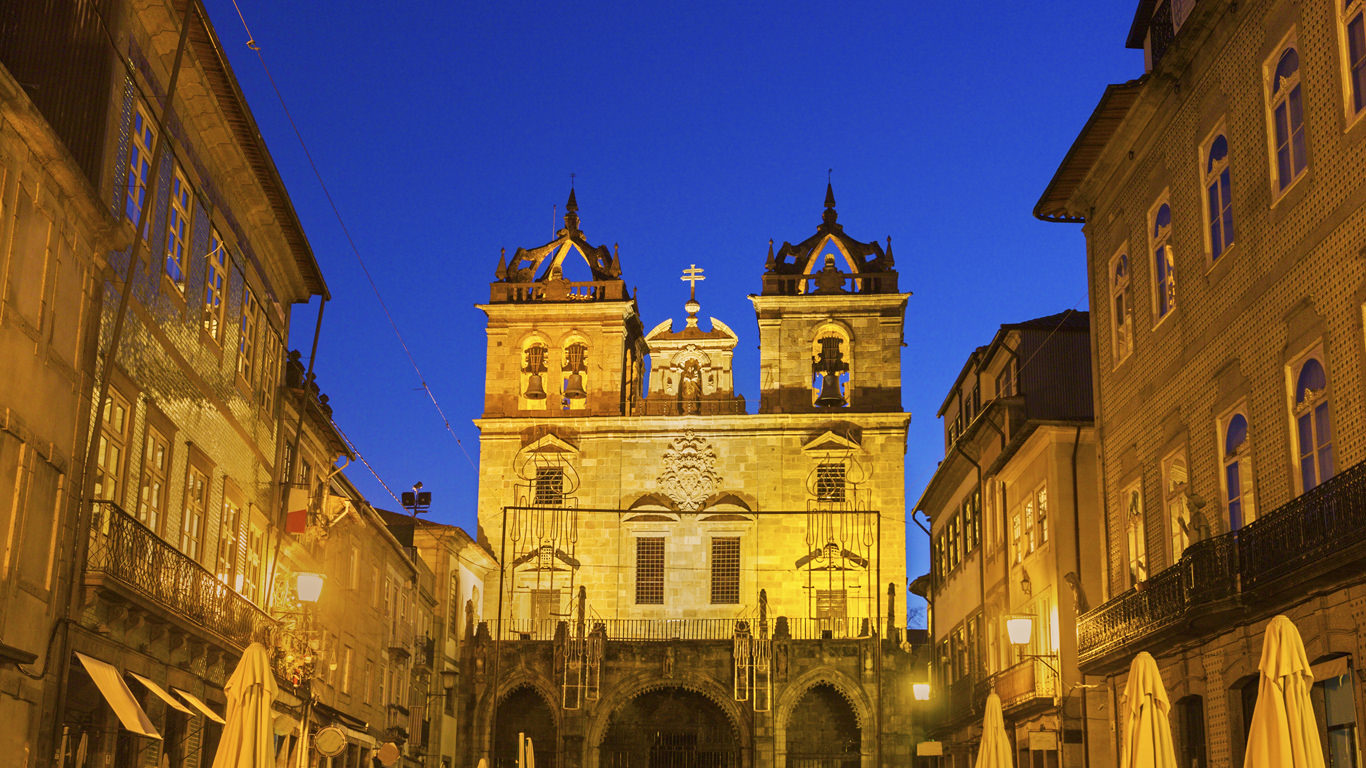 “Older than the Cathedral of Braga” is a popular expression that is used when you want to set the age of something, which corroborates the old as is the cathedral. According to tradition, the Braga diocese was created in the third century, but story only confirms from the year 400. 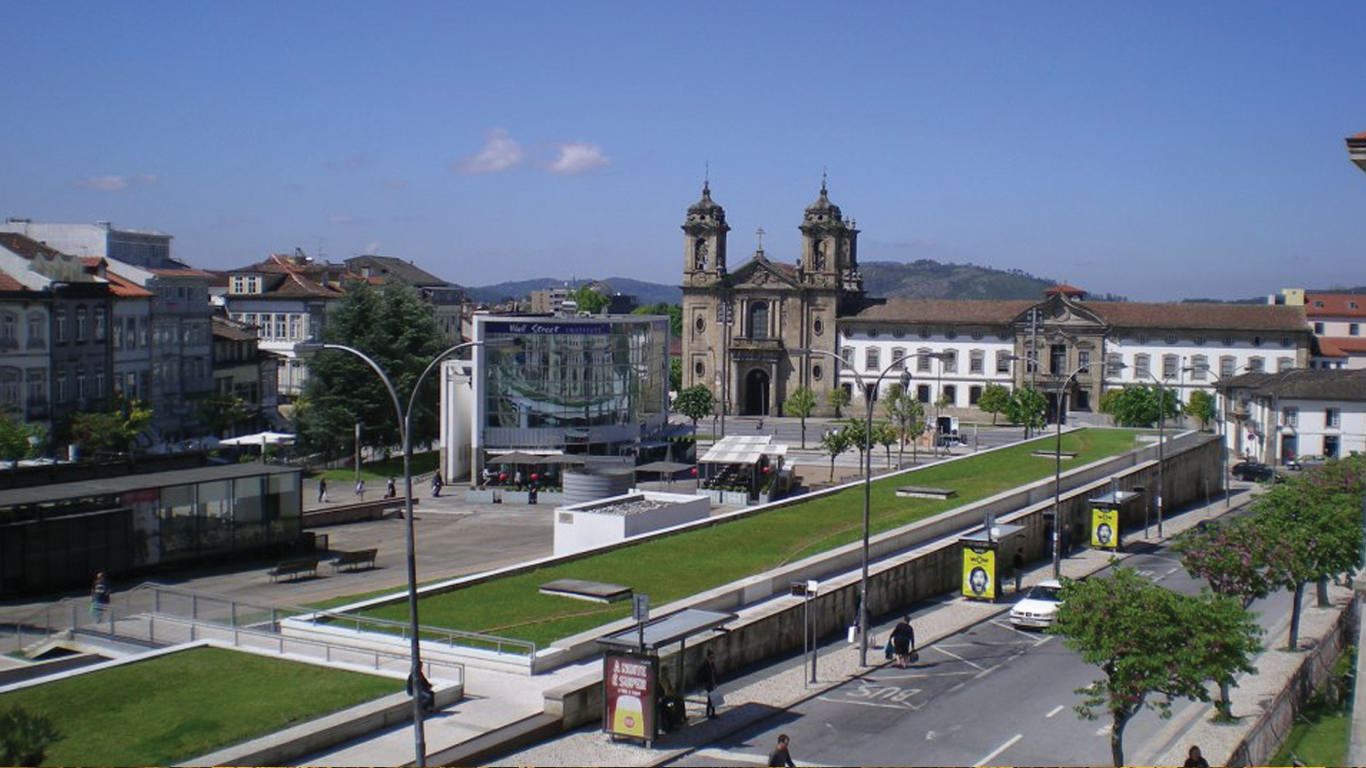 The Campo da Vinha is one of the more urban product of the Archbishop Diogo de Sousa action. The popular name by which today all the Braga know stems from the fact that there existed the vineyard of Santa Eufemia. 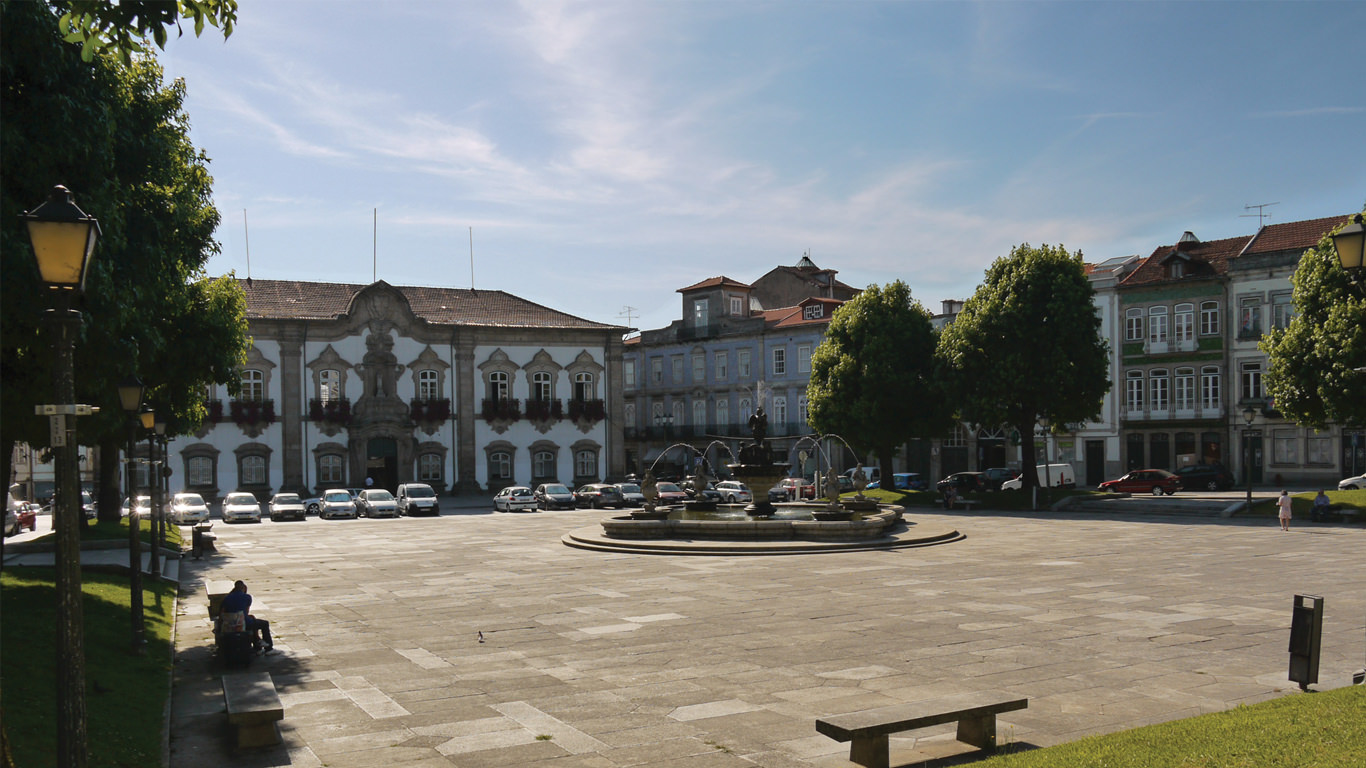 Square of the City

The Field Bulls, as was once known this square, there unfold festivities of this nature would have been open in the second half of the sixteenth century, during the prelature of Archbishop Frei Agostinho de Jesus (1588-1609). 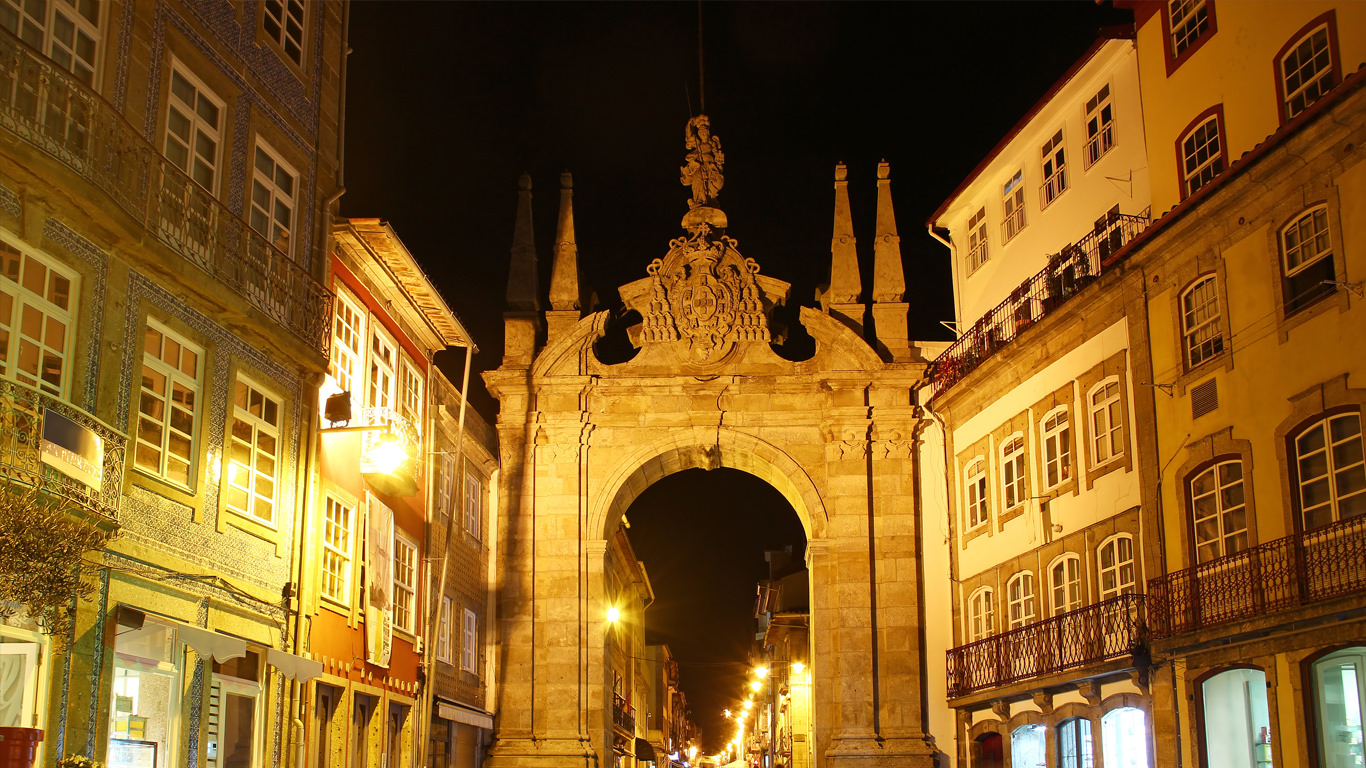 It was one of the gates of the city walls, torn in 1512, at the time of the Archbishop of Braga, D. Diogo de Sousa. Its current façade dates back to 1772, at the initiative of Archbishop D. Gaspar de Bragança. 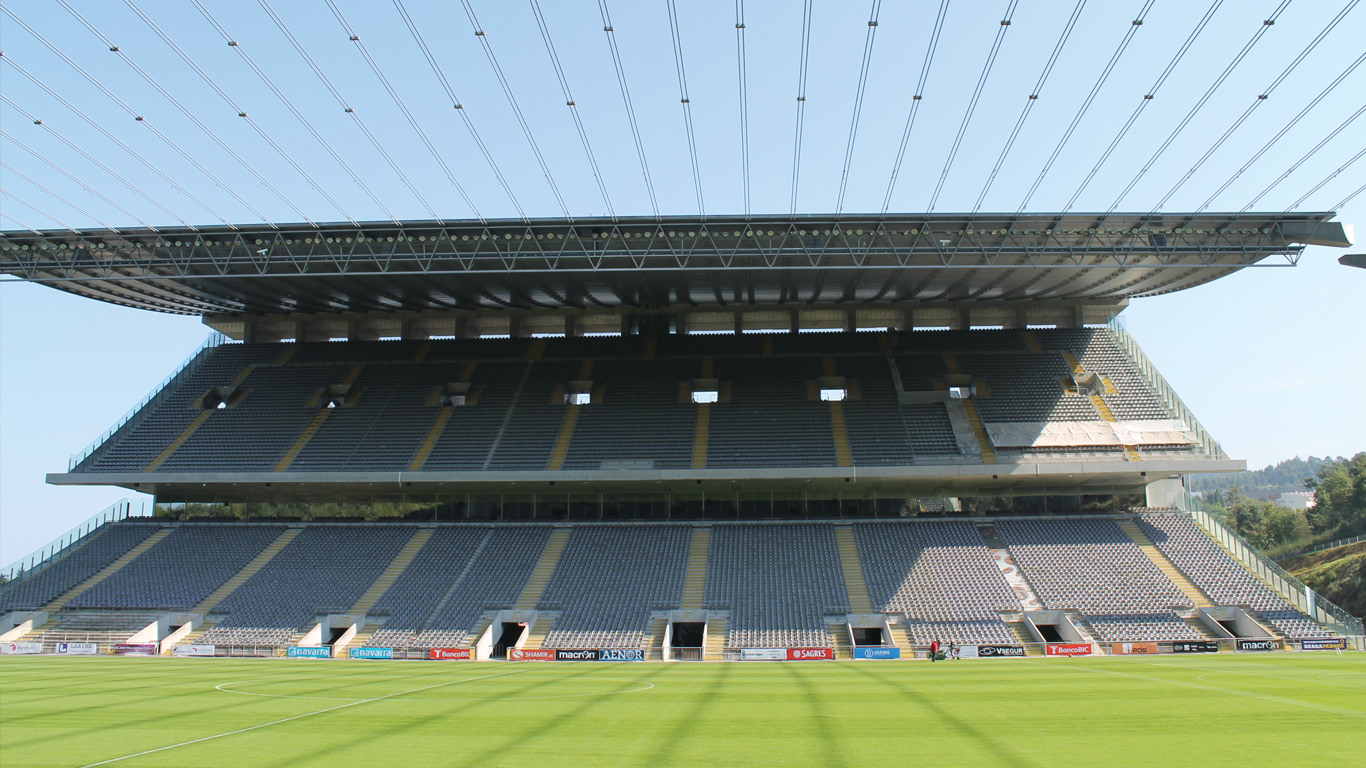 The Braga Municipal Stadium, known as the Quarry Stadium is a football stadium designed by Portuguese architect Eduardo Souto Moura (Pritzker Prize 2011) and by Eng. Rui Furtado. It is inserted along the urban park implanted on the slopes of Monte Castro. 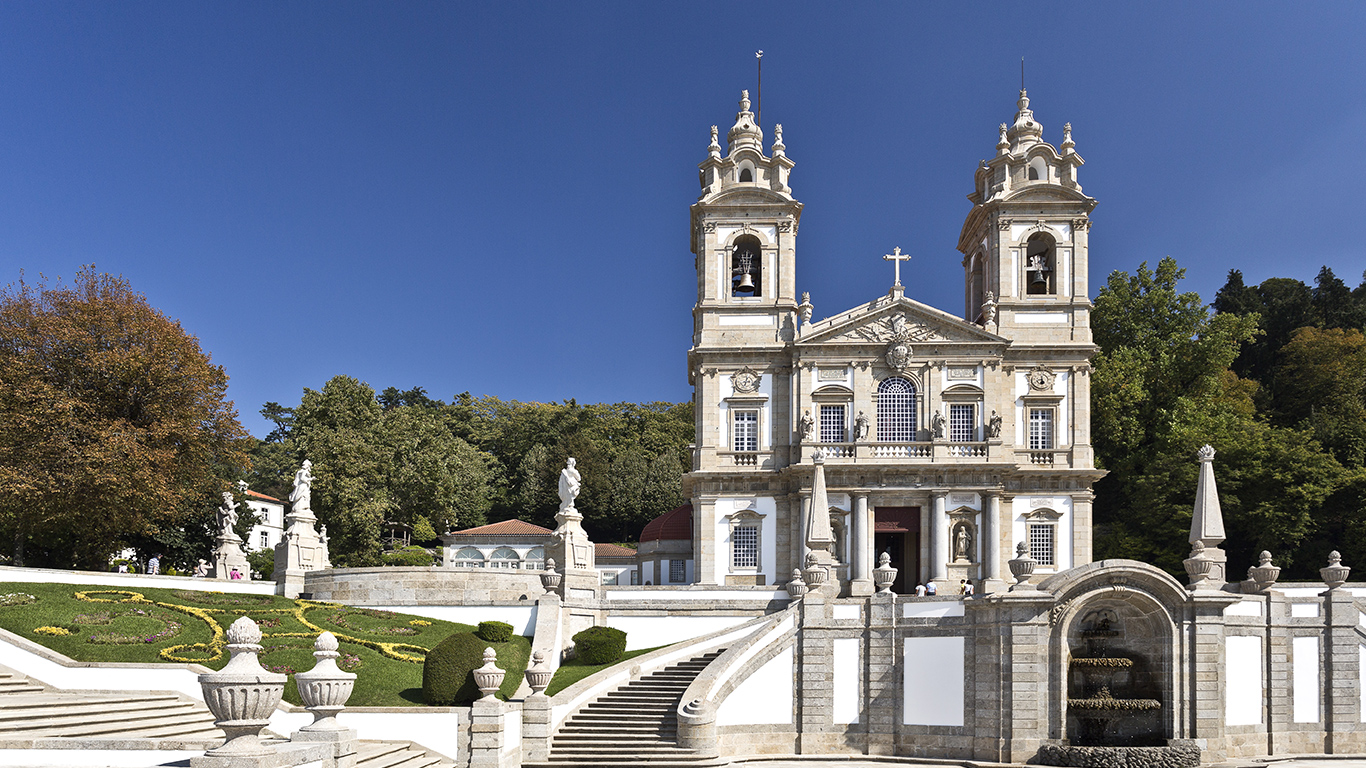 Bom Jesus do Monte is the landmark of the city, where art and nature are combined making it a sacred space and rest. It is a resting space and ride with the diversity and rarity of its species of trees, vegetation, gardens, grottos, fountains, gazebos, lakes with rowing boats, etc. 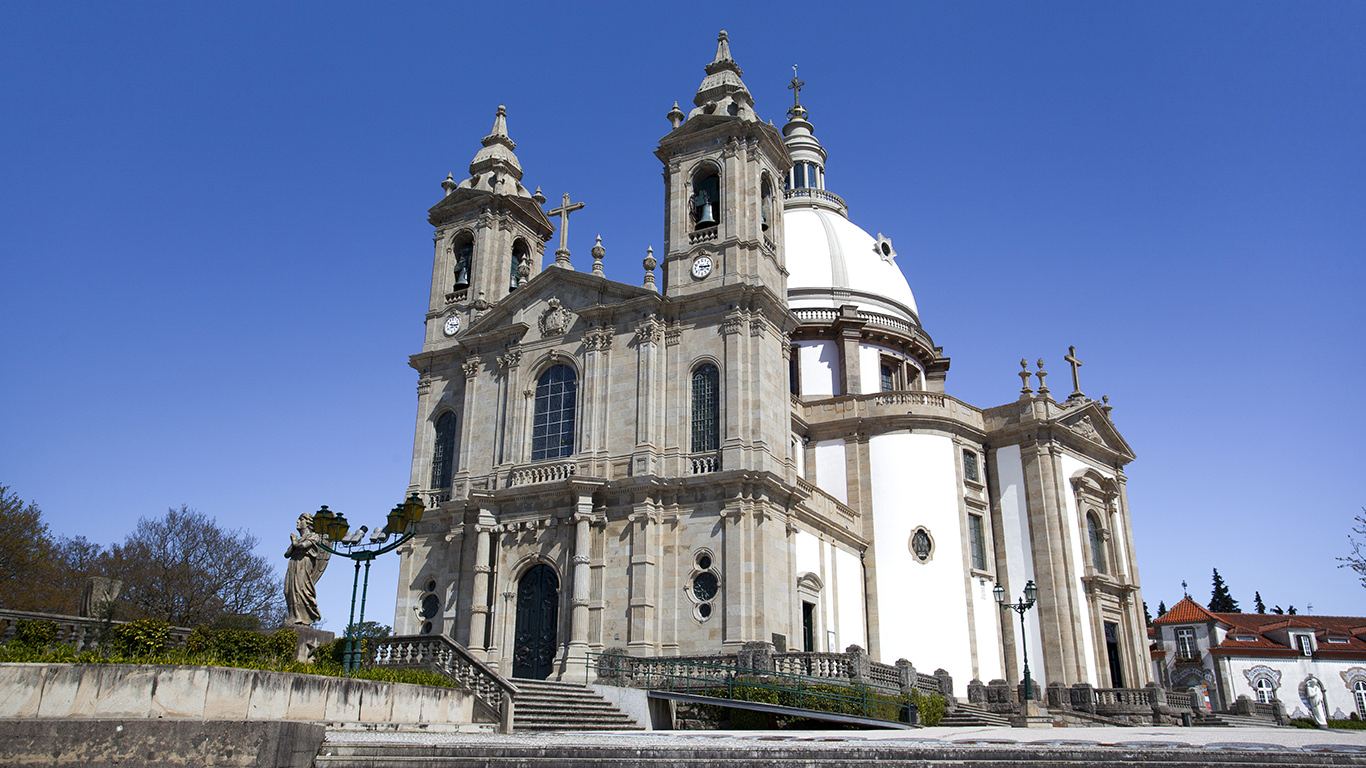 The Sameiro Sanctuary is a Marian sanctuary whose construction began on 14 July 1863. The founder was the Vicar of Braga, Father Martinho António Pereira da Silva. It is one of the largest centers of Marian devotion in Portugal. 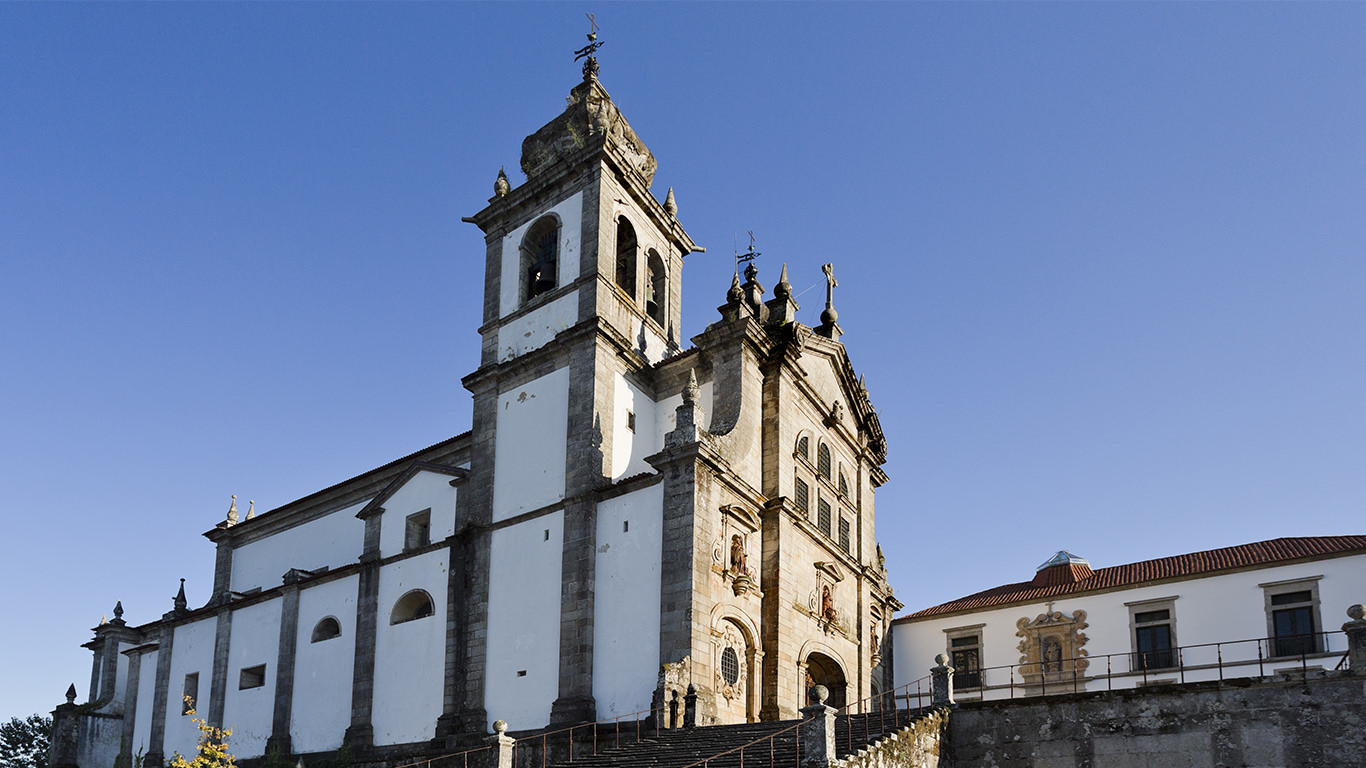 The Tibães Monastery was founded in the eleventh century. In the sixteenth century it became the order’s mother-house for Portugal and Brazil. It is classified as a Public Interest Building since 1944 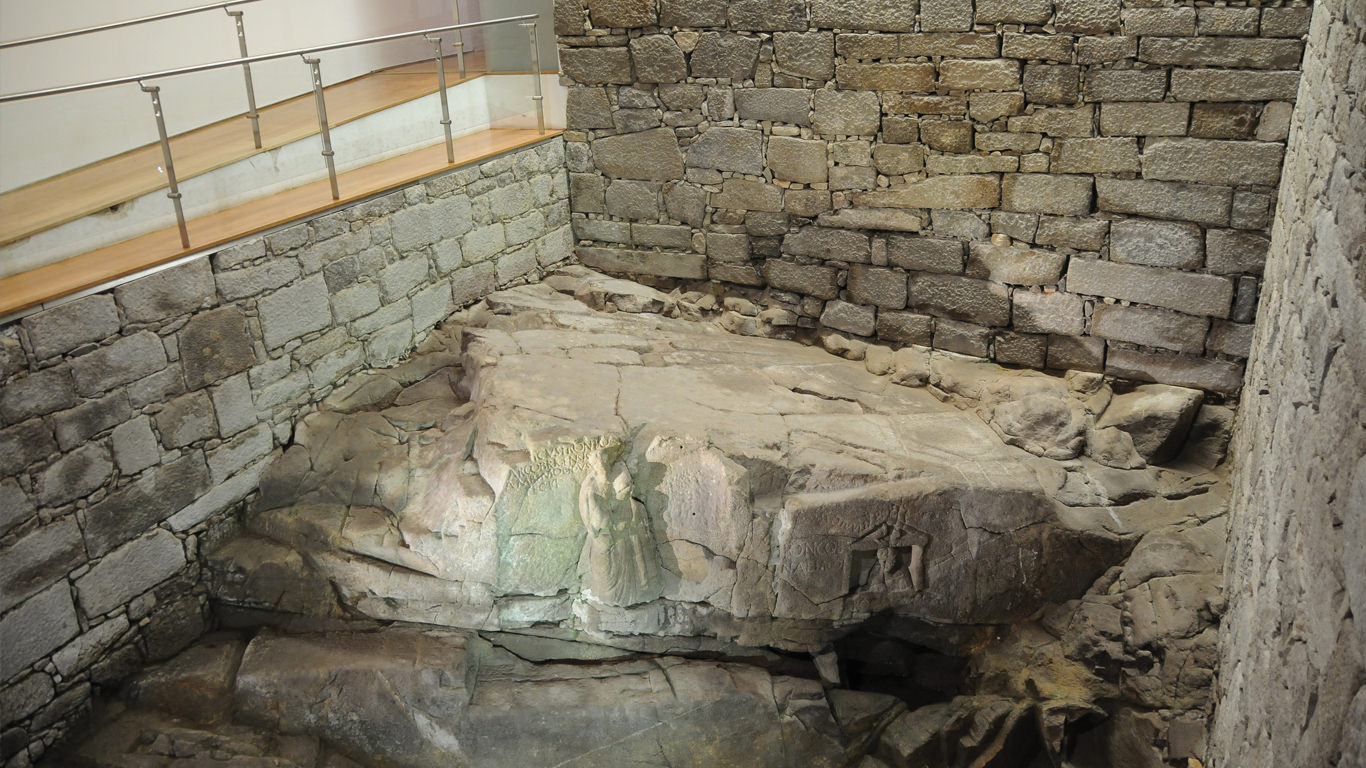 A rock sanctuary that displays a carved vertical front of a granite outcrop, in which figurative reliefs and inscriptions were carved, working with fountain. Everything indicates that had pre-Roman origin, having been consecrated to the goddess Nabia as main deity and Tongus Nabiagus his partner, an immigrant, originally from the city of Arcobriga called Celicus Fronto. 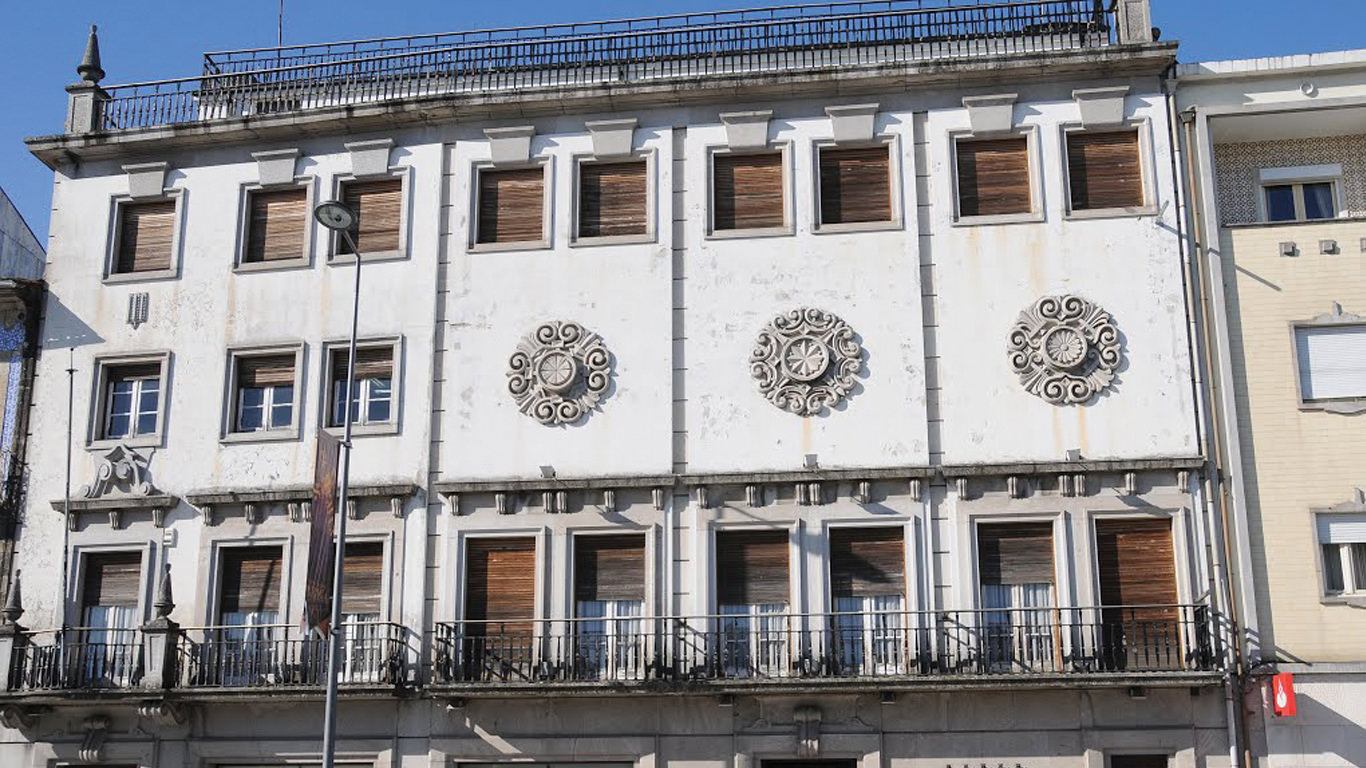 The Museum made in September 1975 owes its foundation to António Augusto Nogueira da Silva. Originating of a family Braga, developed a philanthropic activity for which he was awarded several honorary orders. The museum has a varied collection of paintings, sculpture and decorative arts. It has showroom and develop diverse cultural activity. 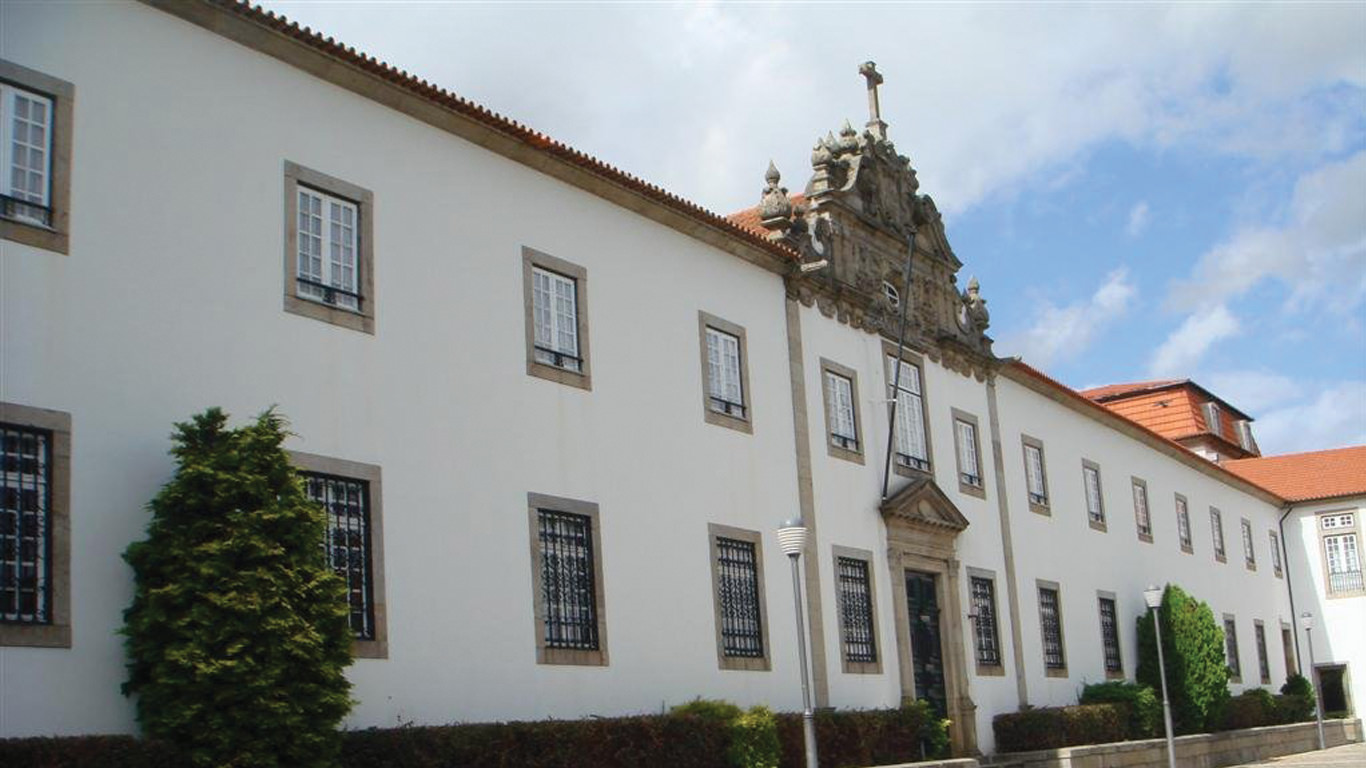 Founded in 1957 by Canon Luciano Afonso dos Santos, it is a museum dedicated to the Sacred Art and Archaeology. The museum has undergone several changes over the years. Between 2000-2002 the museum, with the support of the European Union, it is fully renovated. Currently the museum’s collection is divided into seven parts. 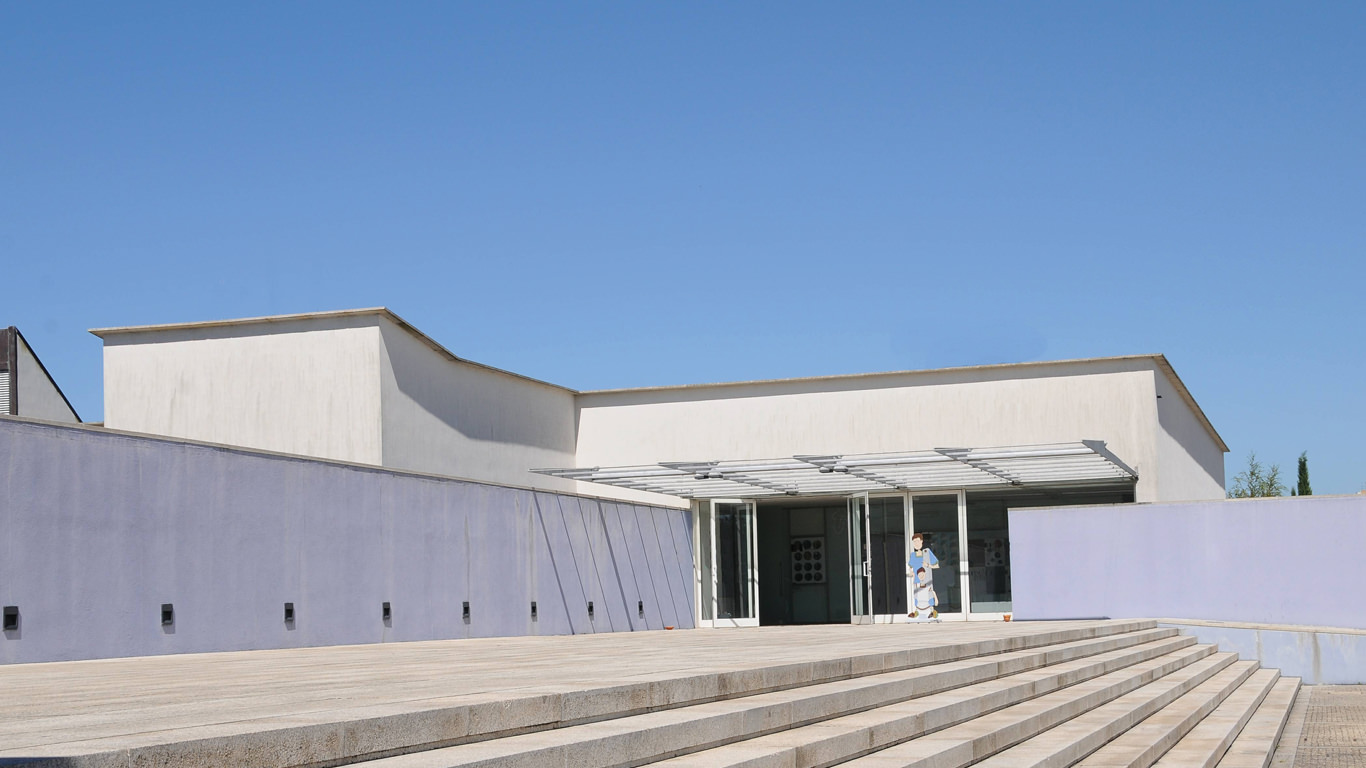 The Archaeological Museum D. Diogo de Sousa is a museum that contains archaeological collections of the Northern region of Portugal, with a particular focus around Braga, whose chronology extends from the Paleolithic to the Medieval era. 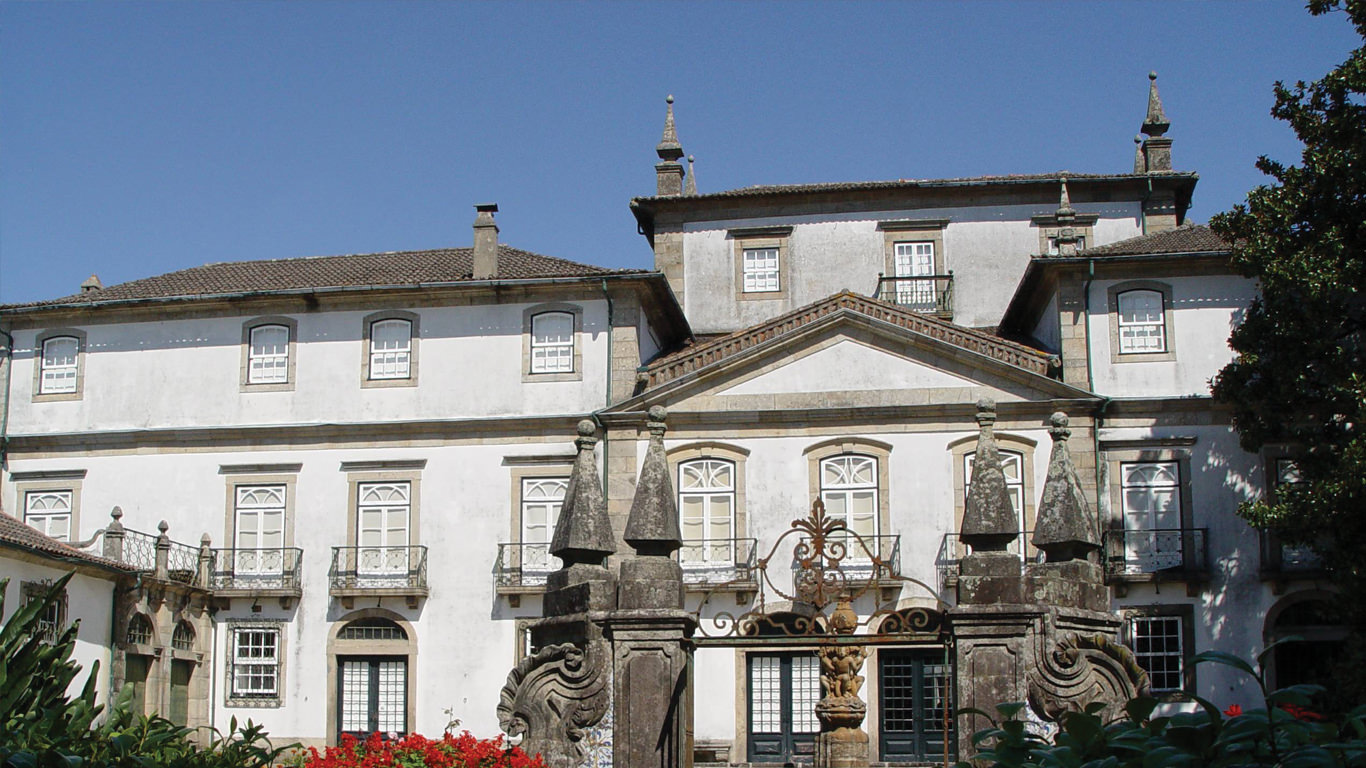 This aristocratic palace, with large rooms with luxurious ceilings and baroque gardens reveal the daily life of the eighteenth century nobility, as well as numerous references to the lives of other inhabitants of space: servants, slaves, chaplains. 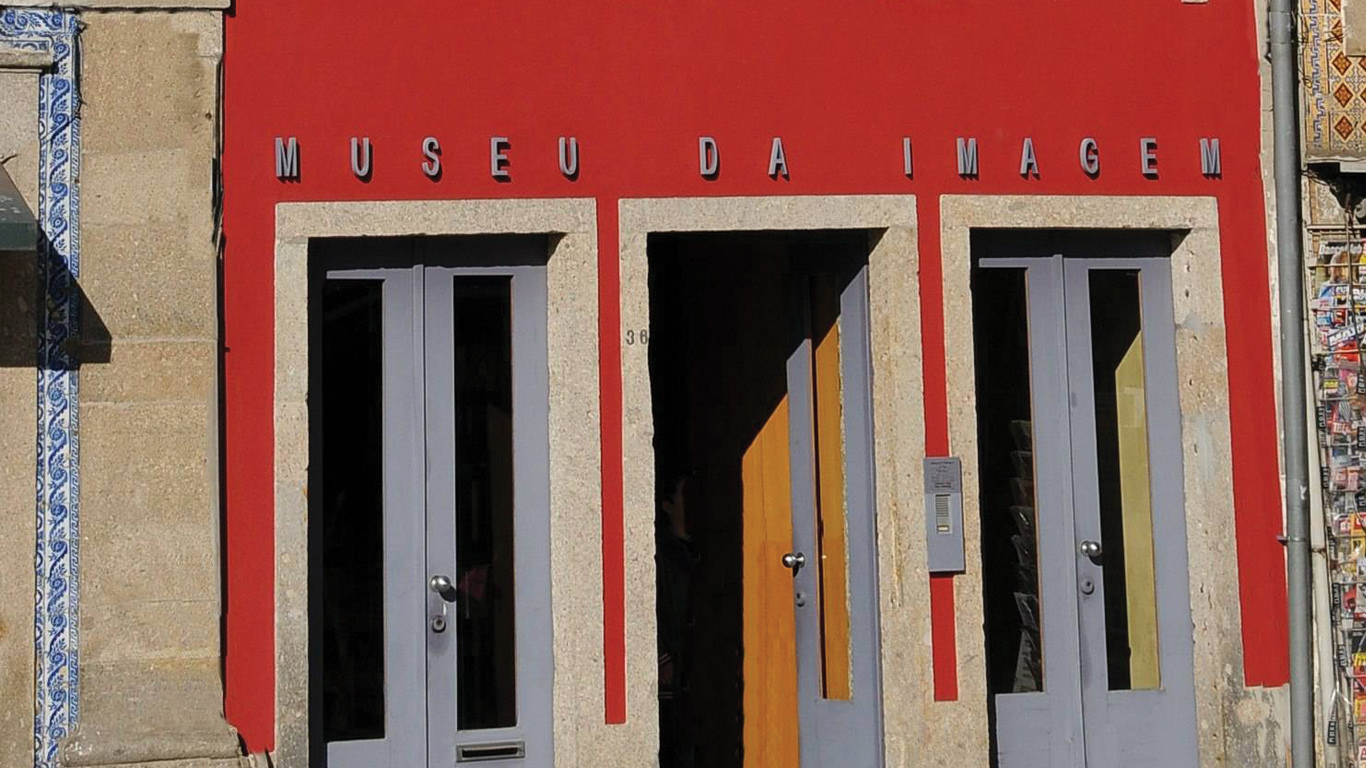 It is a museum dedicated to photography. It was inaugurated on 25 April 1999 and is installed in the Campo das Hortas, next to the Arco da Porta Nova. The property consists of a nineteenth century building and a century tower XIV of the ancient medieval wall. The museum has historical cameras and a large photo of booty. 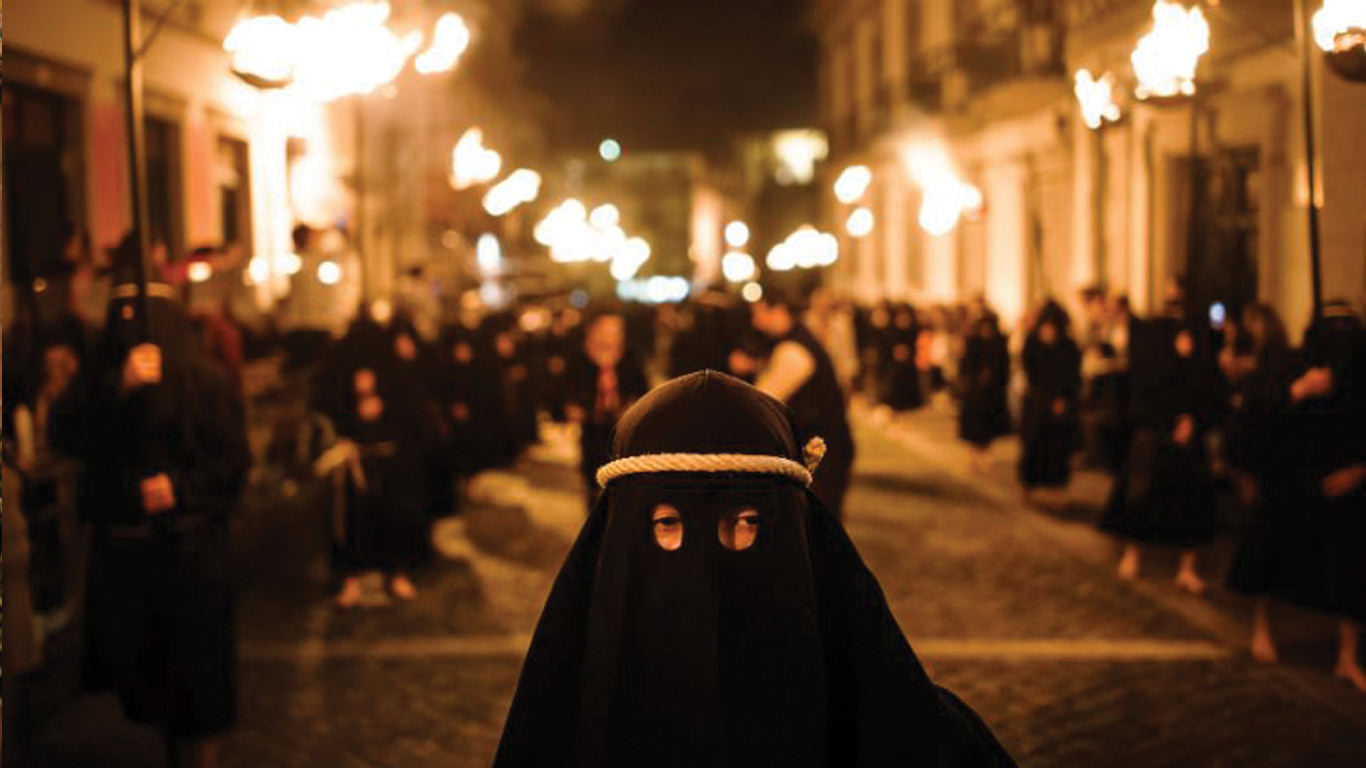 It is the religious event that attracts more tourists to the city with various processions. 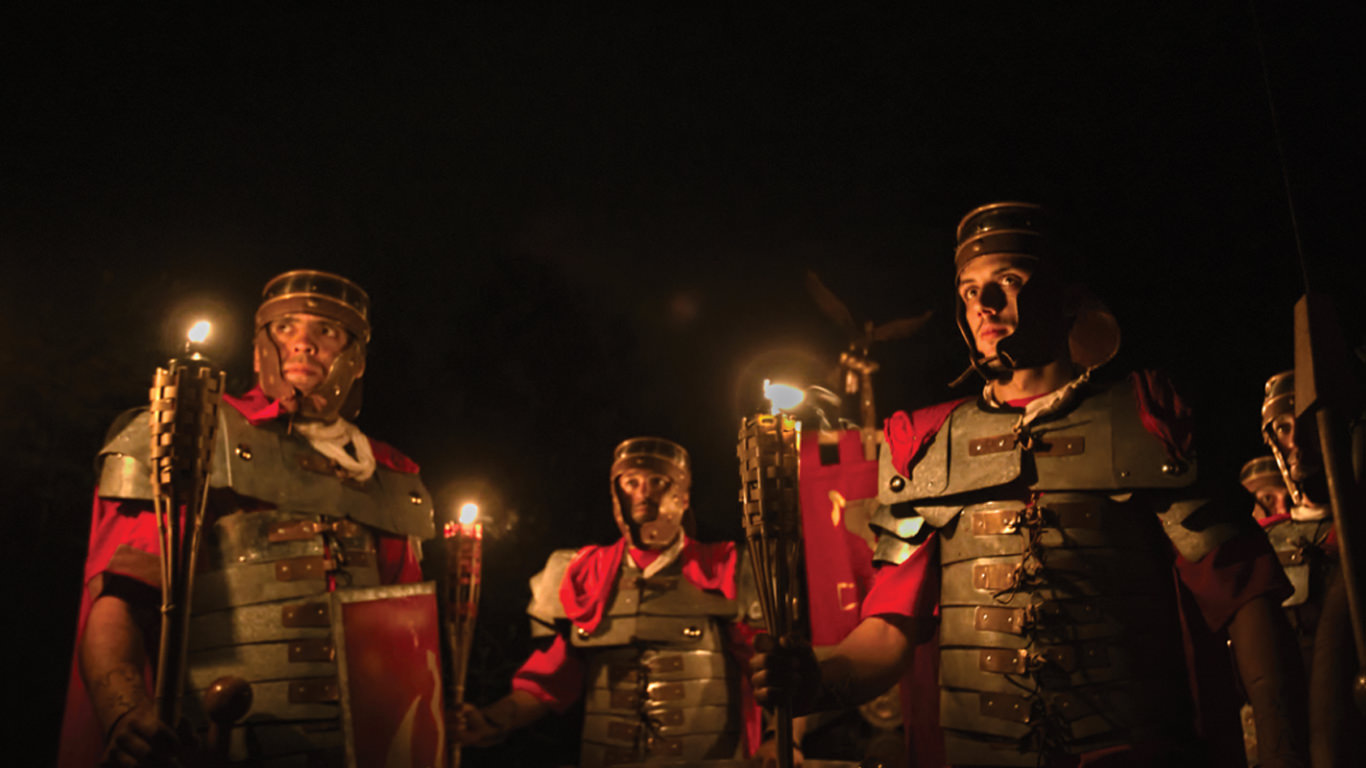 The event “Braga Romana” is meant to celebrate the early life of what was the Opulent Bracara City of Augustus. 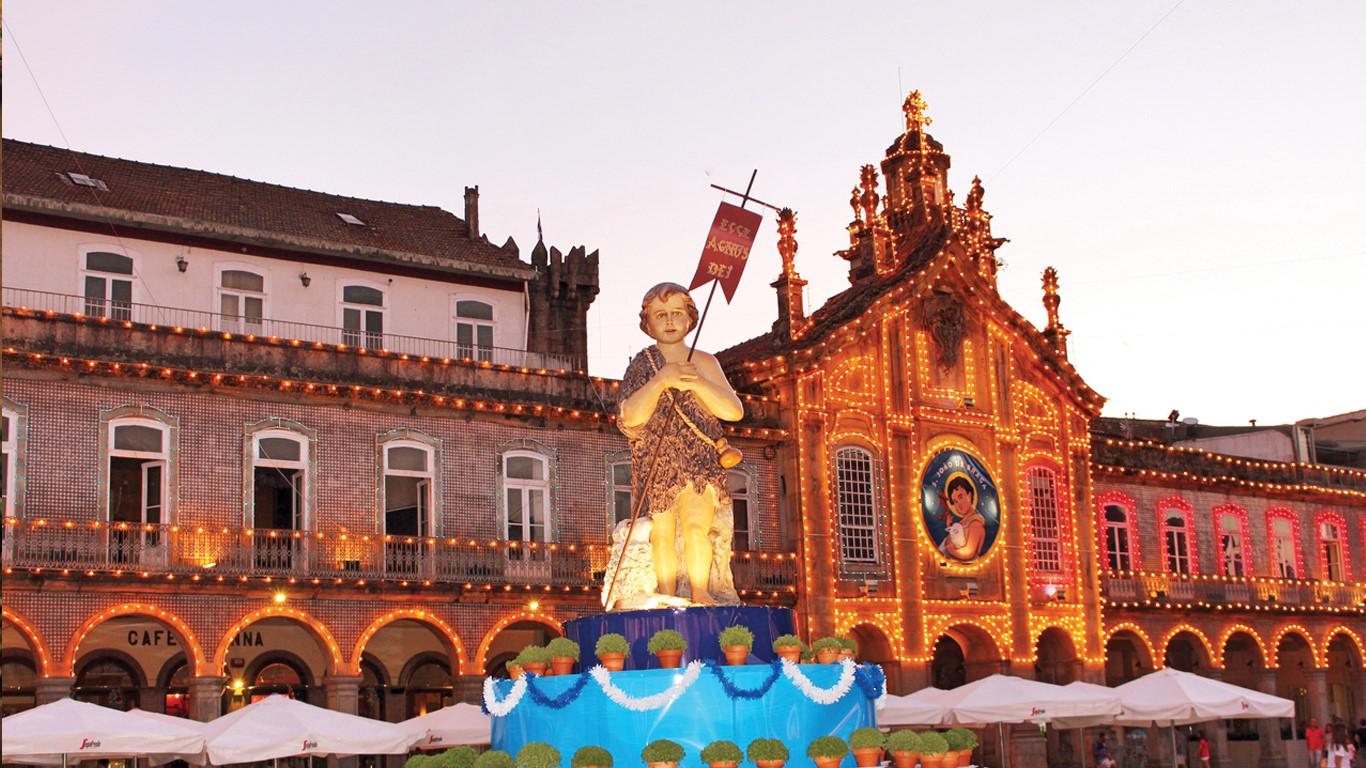 It’s the biggest party of the county that celebrates the birth of St. John the Baptist. The culmination of the festival is the night of 23 to 24 June. 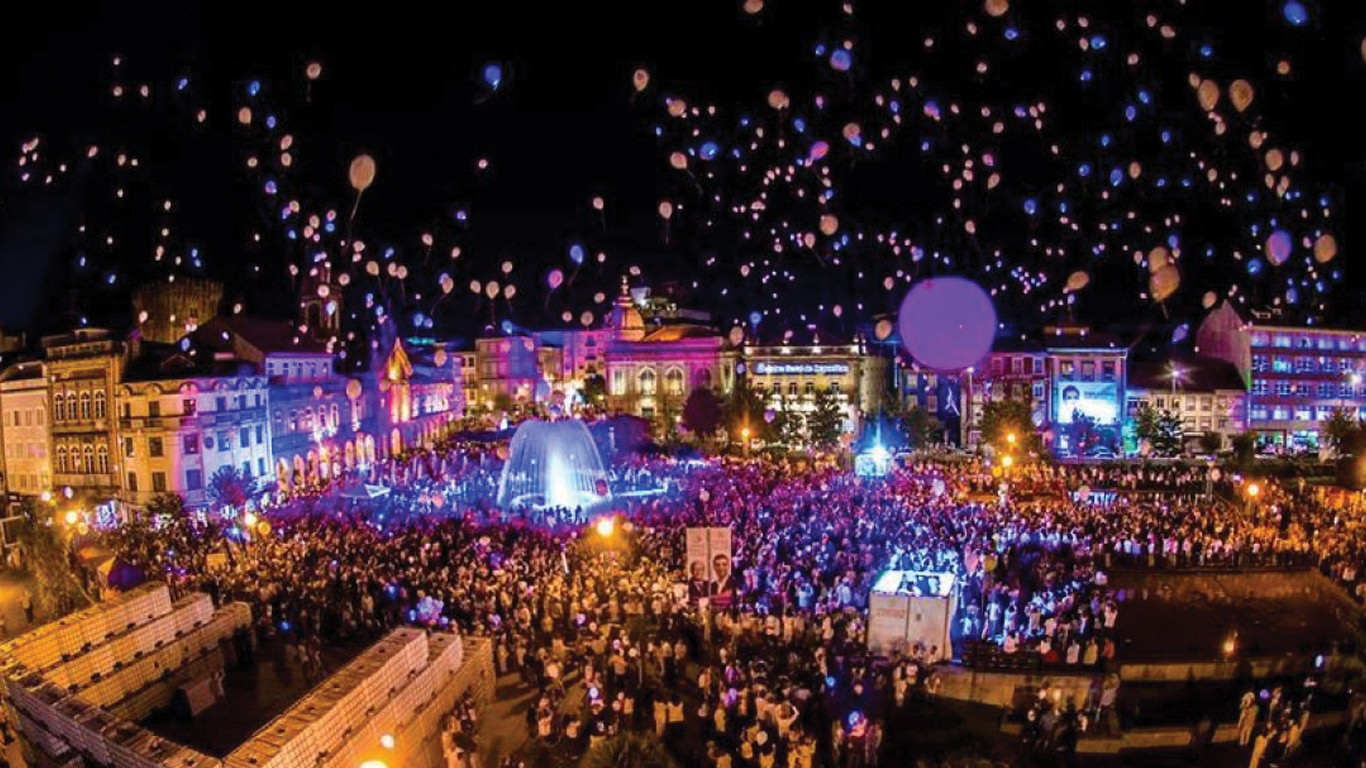 It is a cultural and leisure initiative celebrating the city, infrastructure and culture. An event open to the community and visitors. Total Party are 48 hours in Braga, more than one event per hour. 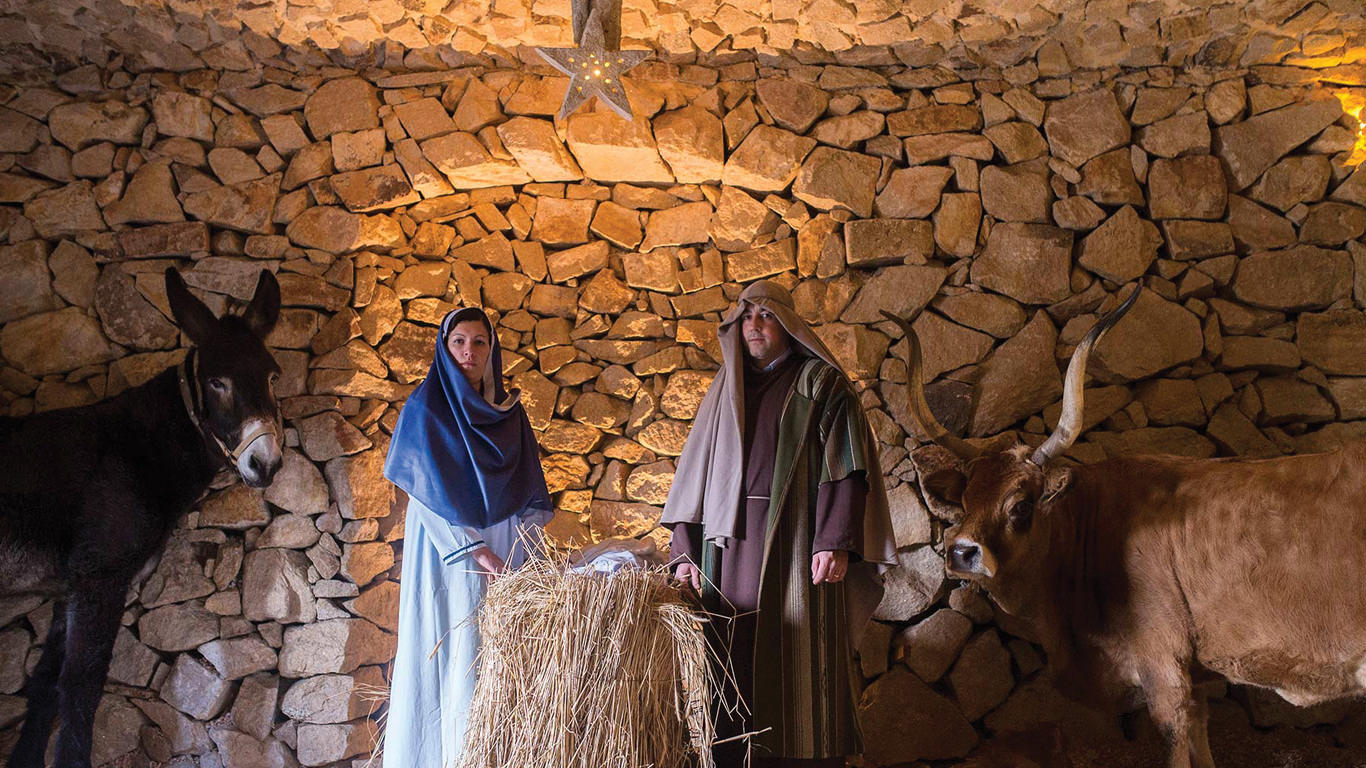 The Live Nativity Scene of Priscos is an opportunity to make a trip to the time of Jesus. The time with voices, music, smells, tastes, sounds, houses, shops, parks and markets. 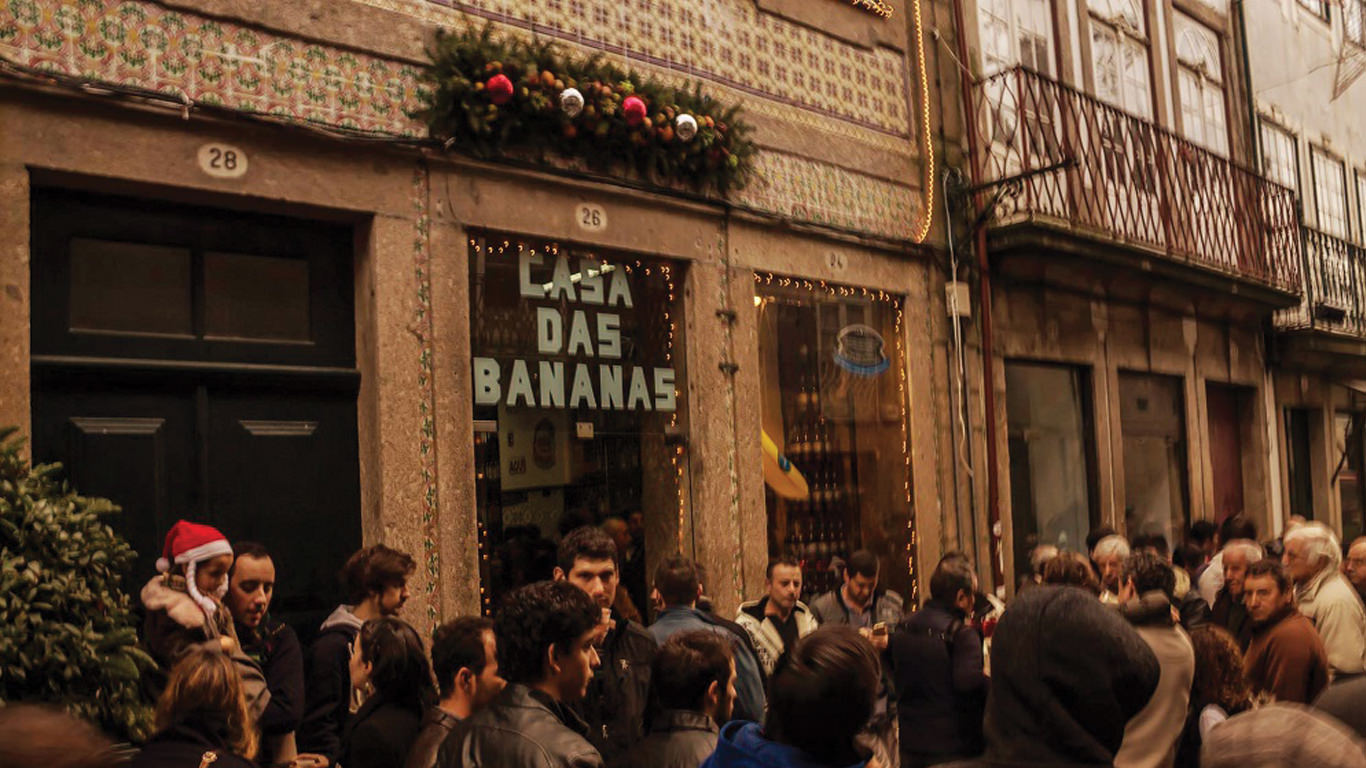 A trip to “Bananeiro” just hours before Christmas Eve dinner is one of the most kept traditions by the people of Braga. It all started more than three decades ago at the “Casa das Bananas” store (House of Bananas). 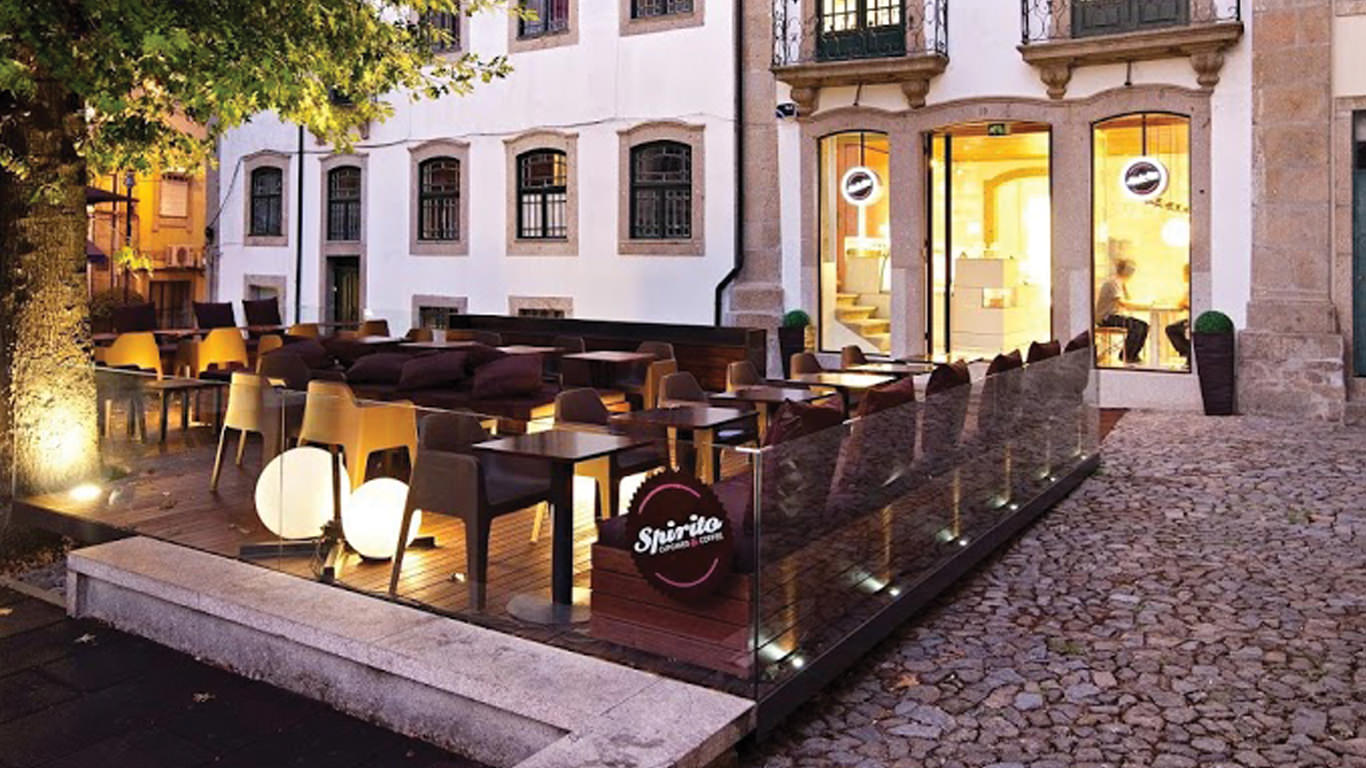 The Spirito Cupcakes & Coffee was born in Braga in summer 2011 to provide an alternative to traditional coffee, the typical cakes and industrial ice cream. 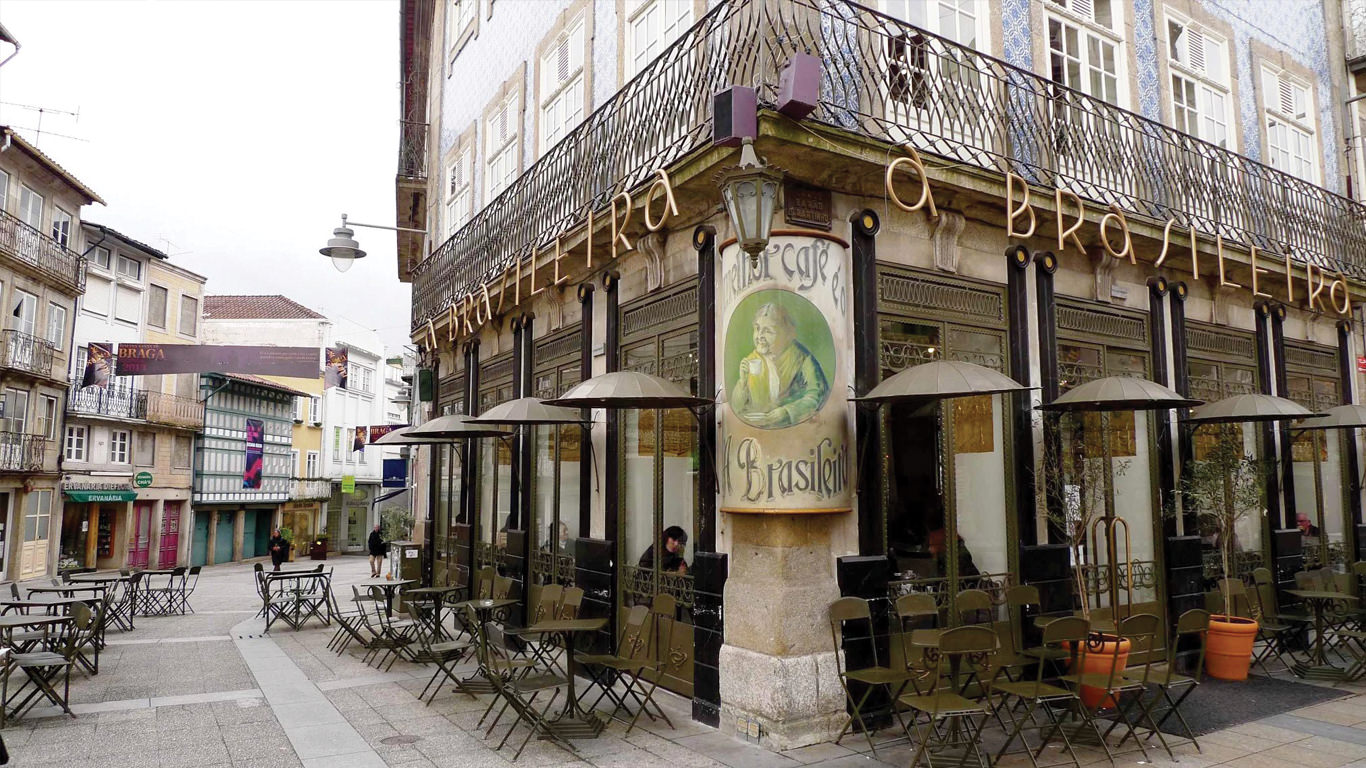 One of the oldest and most historical coffee shops in the city, having celebrated one hundred years in 2007. Localized in the historic area, you can observe the Arcada and the beginning of Avenida da Liberdade in its friendly terrace. 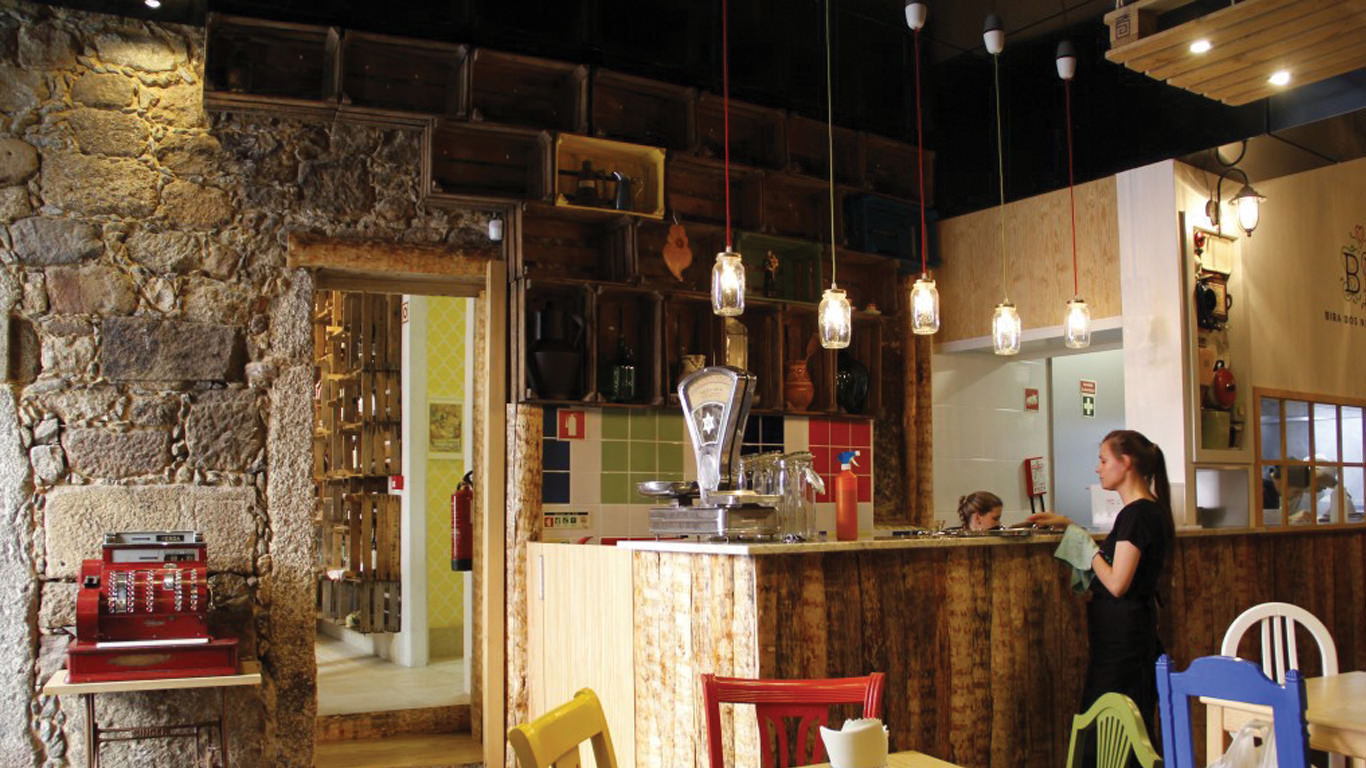 Situated near the Cathedral, in the center of town, we find the “Bira dos Namorados” | Hamburgueria and Steak Sandwich, Coffee Shop Concert and Regional Products. 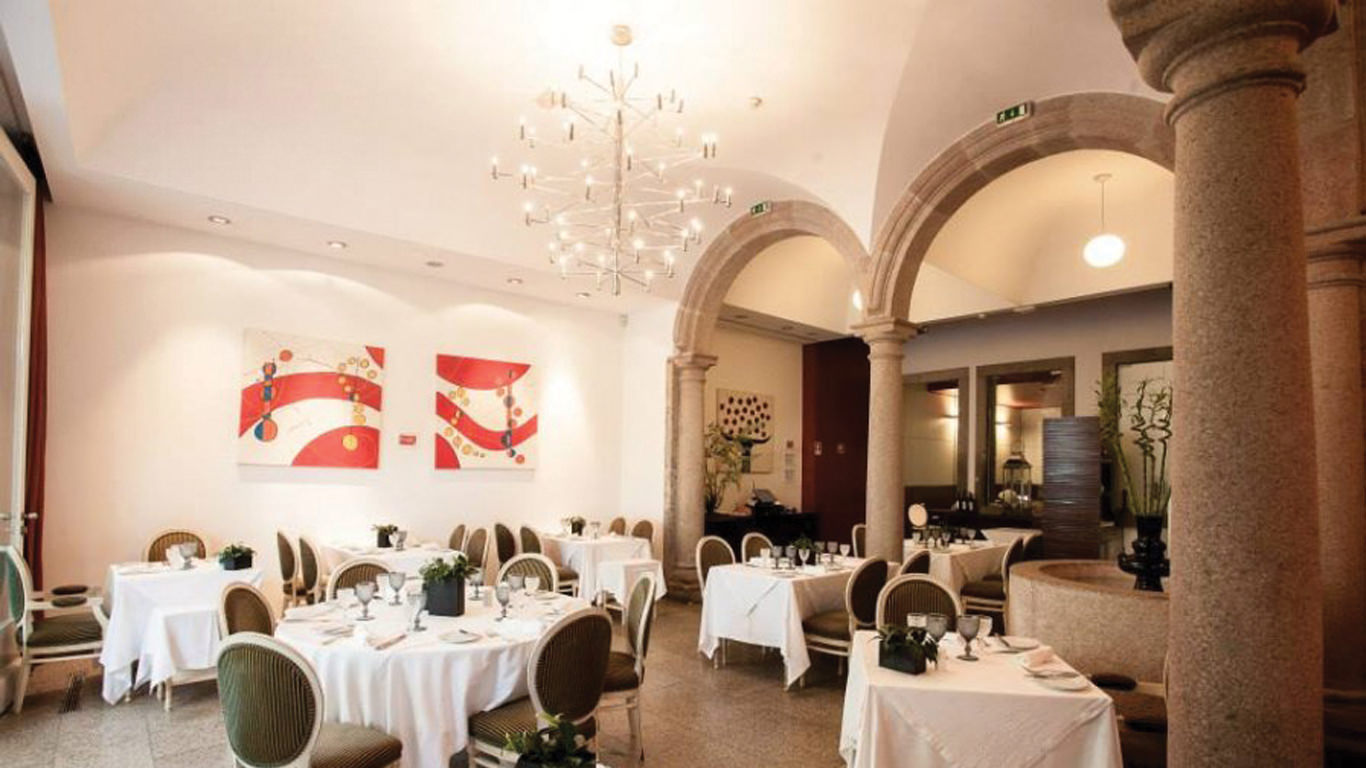 Enjoying a privileged location, Centurium restaurant is housed in a nineteenth century building, the House of the Legion. Inside, the arches and walls of granite, piped music, private garden and a soft, warm decor, invite the pleasures of gastronomy and good conversation.. 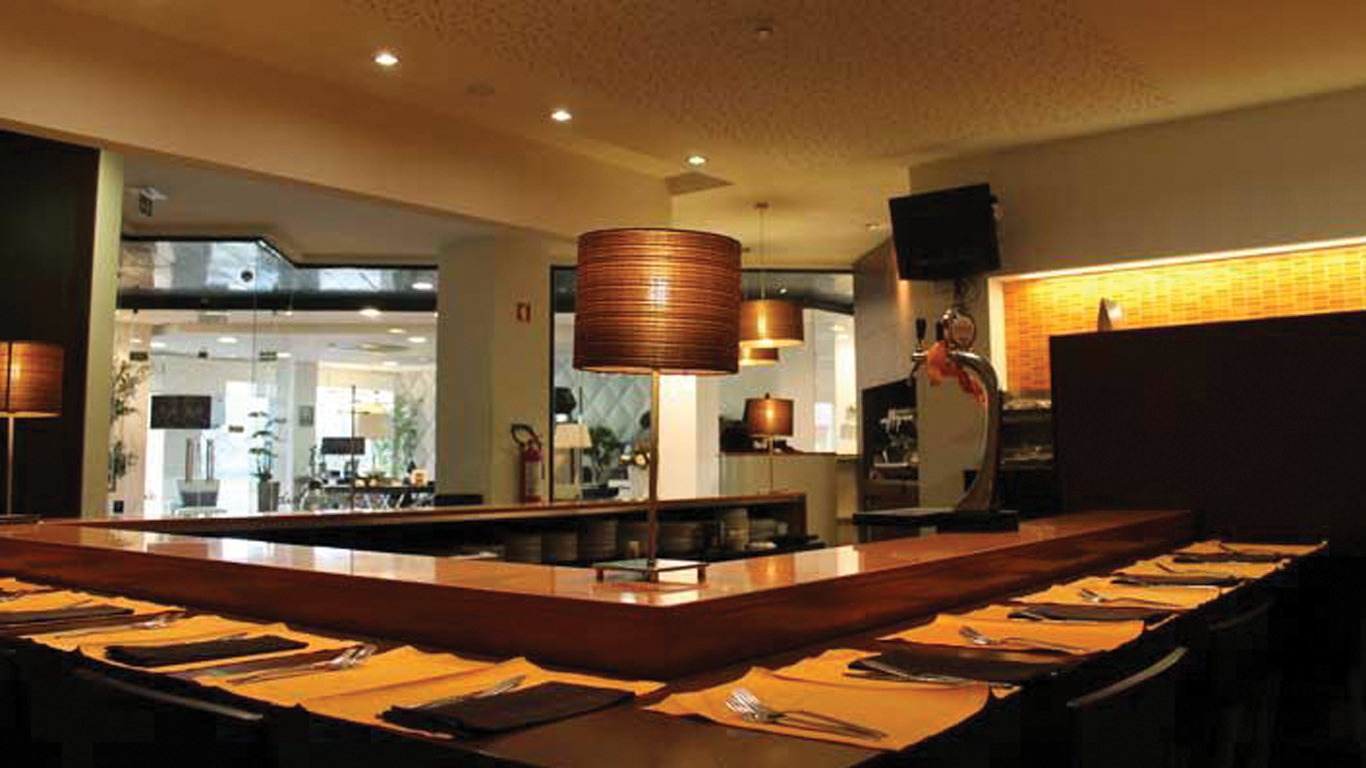 Considered as a reference in the city of Braga, in the art of confection good traditional Portuguese food is not only a place where the customer feels welcome to enjoy a great meal, it is also a living space. 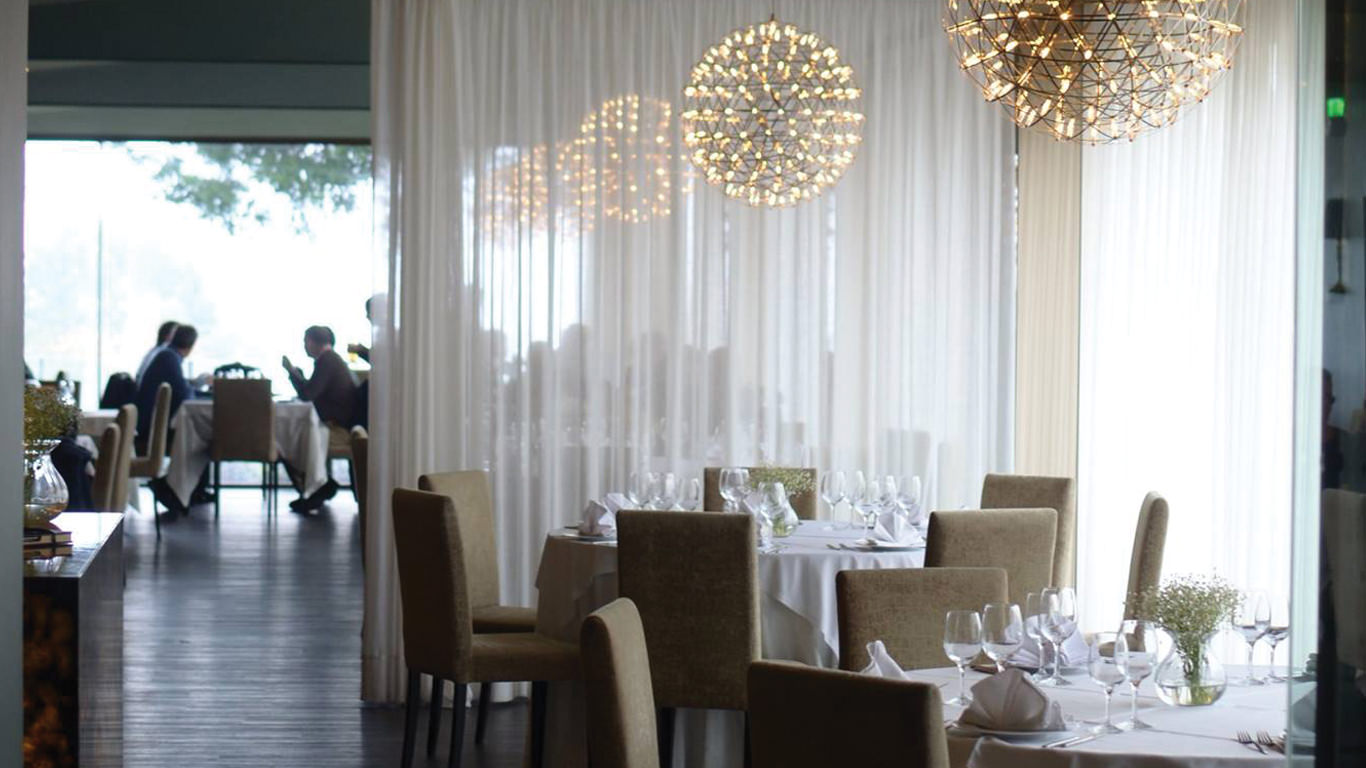 For those who enjoy the traditional flavours of Minho, this is certainly a restaurant worth considering. A space that presents its visitors with 3 distinct rooms, each one with its own personality.